It is heartening to know that “extensive engagements were made with stakeholders (including Nature Groups) to discuss measures to reduce environmental impacts during the EIS process, including the design optimisation of worksites as a method of Impact Avoidance / Elimination”, as mentioned on page 2 of the “Non-technical summary for the EIS of CRL2”.

I learnt that these measures include relocating the upcoming Maju station to protect the flora and fauna in Maju forest, and realigning the tunnels between King Albert Park station and Maju station to reduce the ecological impact on wildlife.

Even so, I am concerned to learn that “the nearly 2,000-page study found that the CRL could still have a major environmental impact on several forested areas near Eng Neo Avenue Forest, Clementi Forest and Windsor due to irreversible habitat loss.”

Several questions came to mind, which I hope LTA and other relevant agencies could address, and which I hope are not too late or inconvenient to ask, considering the fact that we are facing climate emergency, biodiversity loss and public health challenges in the Anthropocene:

Firstly, when the Cross Island Line was first announced in 2013, were the plans based on any public survey to ascertain if there was sufficient demand from residents in the affected areas for MRT connectivity, in view of the controversy over the alignment of the line’s Bukit Timah stretch crossing the Central Catchment Nature Reserve (CCNR) and MacRitchie Reservoir?

Part of the controversy centres on whether the protection conferred on nature reserves under the Parks and Tree Act extends for the entire infinite depth of the State-owned land below the surface of the reserve.

If there was no public survey or consultation done prior to the environmental groups voicing their concerns about the encroachment of the planned MRT line in the central nature reserve, other than the initial reason given that “the line was planned to relieve congestion on the existing East West Line”, I wonder what would be the economic imperative(s) that drove the CRL plans?

For example, would the planned CRL construction be driven by the “growth-at-all costs” capitalistic economic model that Singapore has been subscribing to, which would lead to a constant need to clear existing carbon-sequestering regenerating secondary forests for more housing, transport network, and other aspects of high consumption lifestyles (such as house flipping with no intention for long-term stay or little regard for habitat loss resulting from building new flats, condos, roads, MRT stations, etc), even if there is a low population growth rate?

If so, what if we were to adapt and adopt viable alternative economic models that respect planetary boundaries and de-prioritise limitless economic growth, like that of New Zealand and doughnut economics, as recommended by Singapore youths’ Green Policy Paper 2022?

Would we still need to proceed with the development of the CRL2 line as planned, and could we also revise or postpone the development of the CRL3 and the remaining phase of Jurong Region Line (JRL), if any, indefinitely until there is a definite demand from stakeholders, including residents in the affected areas, since CRL3 and JRL lines may adversely impact more forests and wildlife, such as in the highly biodiverse Western water catchment area, in the future?

Similarly, could I request that LTA work with other agencies such as Urban Redevelopment Authority (URA) and Housing & Development Board (HDB) to restrict any future housing developments around the new MRT stations, such as Turf City and Maju stations, to only previously developed lands because we do not want to end up with another undesirable scenario where more forests have to be sacrificed (resulting in ever-increasing habitat fragmentation and dwindling biodiversity, as well as rising urban heat island effect) like in the case of Dover forest, which is located next to Dover MRT station, whereby Dover Forest East is planned to be mostly cleared for public housing? 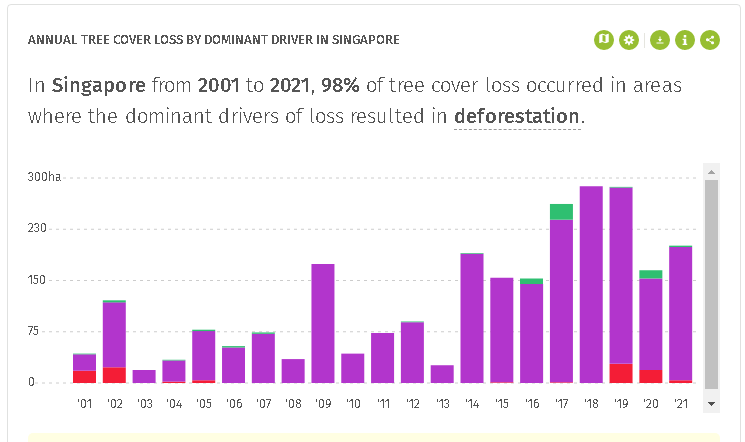 Secondly, while it is good that Singapore has revised our climate targets on achieving net-zero greenhouse gas emissions by 2050, it is worrying that Singapore has been experiencing an increase in tree loss through deforestation in the past decade. In 2021 alone, Singapore has lost 201 ha of tree cover, equivalent to 97,200,000 tonnes of carbon dioxide emissions.

Could LTA account for the carbon emissions that will be caused by the resultant forest habitat loss from the construction of CRL2 line, such as getting the polluting companies to bear the environmental costs proportionately, whether in the form of carbon tax or equivalent for channelling the funds to help the less privileged or protect nature areas, as a necessary part of upholding climate justice?

Thirdly, page 5 of the “Non-technical summary for the EIS of CRL2 – Windsor and Eng Neo Avenue Forest” notes that species of conservation significance, such as globally and nationally critically endangered Sunda pangolin and nationally threatened near threatened Sunda colugo, inhabit the forests in the study areas.

Although there are no stations located within the section of the alignment under this EIS, I noticed that the worksites are intended for the Tunnel Boring Machine launching activities near Eng Neo Avenue Forest and for the CRL facility building at Windsor nature park.

Incidentally, in 2015, I came across a dead pangolin along Dunearn Road near Kampong Chantek (about 200-300 m from Turf City), which is likely a roadkill. Earlier this year, a pangolin was spotted at an MRT station in Bukit Timah area. These sightings suggest that pangolins are vulnerable to becoming roadkills when they happen to venture onto roads in the vicinity.

Thus, I wonder how the pangolins would be affected by the upcoming construction of Cross Island Line (CRL2) MRT station in Turf City and underground tunnels in the vicinity.

Being nocturnal animals that burrow underground, the pangolins can be hard to track and monitor for their safety, and workers who are not trained in recognising such endangered wildlife might not realise how the digging activities in the ground may result in accidental injury or even death if a pangolin (or pangolin mother and child) happens to be moving within the construction sites.

Since Eng Neo Avenue forest used to be part of the Central nature reserve before becoming severed from the main nature reserve by the construction of Pan Island Expressway (PIE) years ago, and since the pangolin population in Singapore was estimated to be only around 100 in 2021, any further encroachment on their natural habitats, including Eng Neo Avenue forest, Windsor nature park, Tengah forest, etc, must be given serious attention to ensure that the pangolins do not eventually become extinct, just like the other native wildlife that Singapore used to have, including the cream-coloured giant squirrel and forest gecko (which might have become extinct as a result of the construction of Bukit Timah Expressway that separated Bukit Timah nature reserve from Central catchment nature reserve since the 1990s).

As noted in Private Lives: An Expose of Singapore’s Rainforests, isolated populations of plants and animals could experience an erosion of their genetic diversity and experience inbreeding depression, which could lead to decreased survivorship.

Therefore, may I recommend that LTA and other relevant agencies compensate for the loss and/or disturbance of forest habitats, by building eco-link(s) across PIE to connect Eng Neo Avenue forest and Central catchment nature reserve, whether in the form of a wildlife bridge or culvert or both, so as to facilitate safe movements of pangolins, colugos, etc should they need to escape and seek refuge from future human disturbances and ground vibrations caused by the planned construction in the vicinity?

If cost is an issue, could we get corporate sponsorship from companies that wish to be part of environmental sustainability for building the eco-links?

Thank you for your attention, and I look forward to receiving responses from LTA to the feedback and plans when ready.