I participated in a nature ramble organised by the Nature Society of Singapore on 11 May 2013 evening, during which we walked from Jalan Kayu to Punggol Park. It was a tiring but rewarding walk as the group members and I saw a glorious sunset on one side and a rainbow on the other side of the sky while we were walking along the perimeter of Seletar airport, and we also saw some wildlife such as parakeets, bulbuls, herons, a gecko and so on along the way. Jalan Kayu, as I learnt, used to be a village many years ago, and it is gradually being developed and is now a semi-rural area. 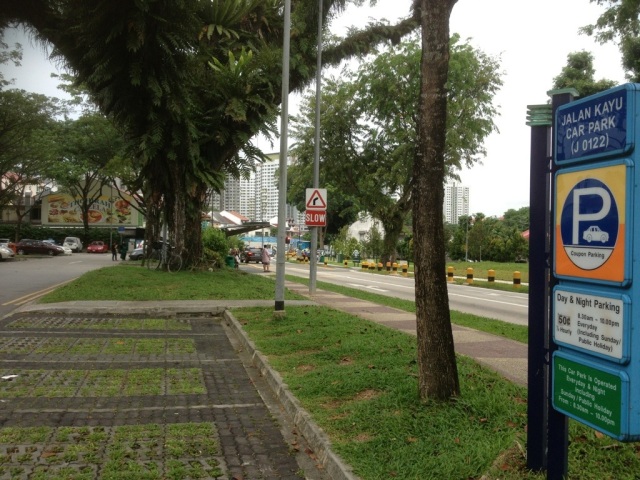 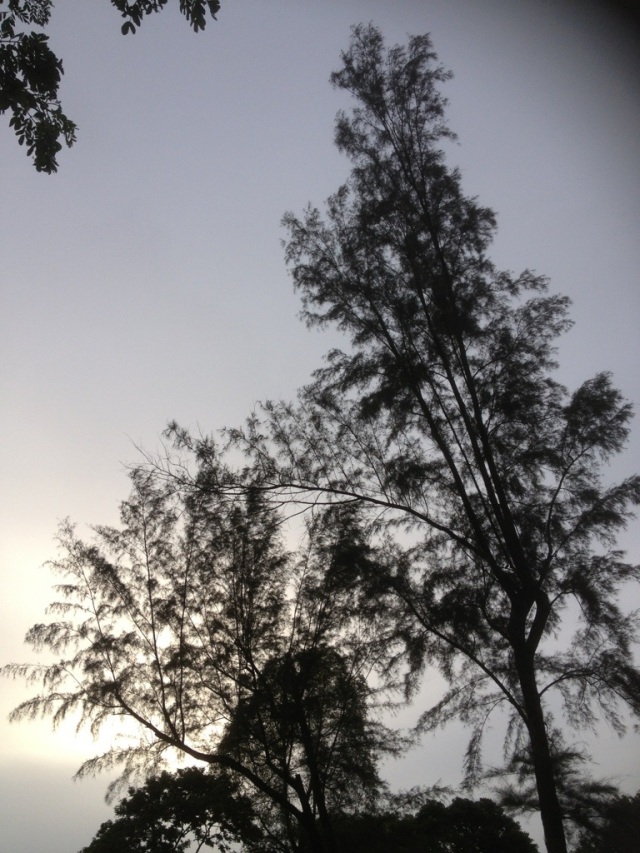 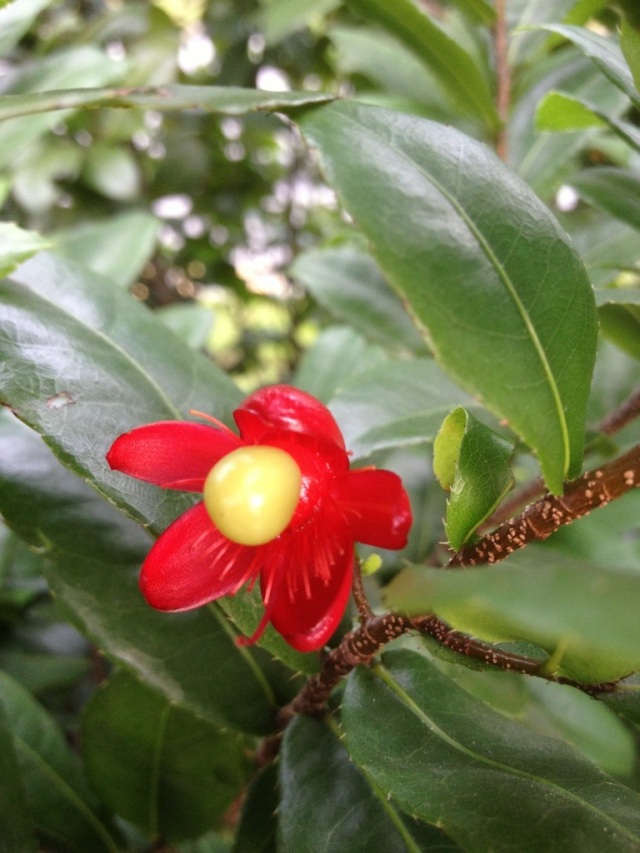 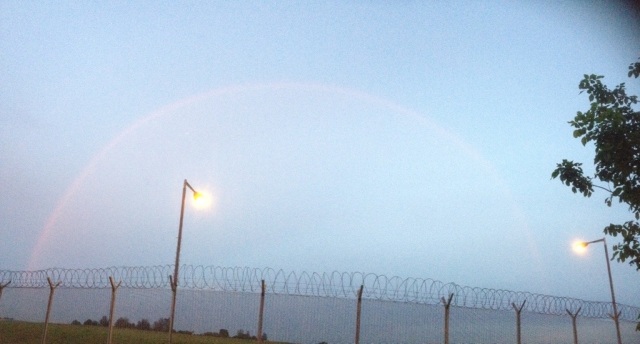 I was glad to have managed to find the starting point which is the public carpark along Jalan Kayu near the expressway where the society members were supposed to meet before setting off for the nature ramble. We started the journey by walking across the expressway towards Piccadilly Circus, which is an old roundabout, and then continued our way northwards, past Seletar airport, before turning eastwards and walked along the breadth of the reclaimed islets. This part of the country is near the border of Peninsular Malaysia, and the Internet connection on my iPhone was lost for a while as its battery was running low. Fortunately, as we crossed the bridge to the mainland across Sungei Punggol, the Internet connection on my iPhone was restored. I think it was because we were reaching Punggol Park near the residential area where the phone network reception is stronger. I decided to head home by myself since it was getting late, and I continued my way walking along the main roads beside the LRT stations that were still under construction. I was glad when I finally saw Punggol MRT station. While I am a nature lover at heart, I have grown accustomed to the modern conveniences of city life, such as the transport amenities. However, I hope the nature areas continue to be conserved for as long as possible as Nature is always refreshing and inspiring for our soul.

“The temple bell stops but I still hear the sound coming out of the flowers.”

Here’s sharing this song I find meaningful. I was reflecting that it is good to dwell on the shared vision of our world united and living as one, even as we continue to speak out against injustice and discrimination in this world.

6th
We have to live as one

Hebrew Verse
It´s time to say,
We are all one heart
This song is of all of us
So let´s sing it together in one big voice.

In response to this article, it is sad to know that justice has not been served to liberate the prisoners who do not deserve to be detained indefinitely and are left to suffer torture and hardship in Guantanamo Bay prison since they have not been charged or have been cleared for release. Their lives matter as much as anyone else, whether they come from Middle East or America or anywhere else. I learnt that one thing we can do is to sign a petition for the US government to effect cleared transfers from Guantanamo and to proceed to close the prison, as mentioned in the website below.

“That is why I am calling on United States Secretary of Defense Charles Hagel to use his authority to effect cleared transfers from Guantanamo and on President Obama to appoint an individual within the Administration to lead the effort to close Guantanamo. Obama announced on April 30 that he plans to do his part to close Guantanamo, but he has made this promise before. Now is the time to hold him to his promise and urge him to take the steps necessary to dismantle Guantanamo Bay Prison.

It is probably no surprise that human rights and activist groups like Amnesty International, the Center For Constitutional Rights, and Witness Against Torture have been outspoken critics of Guantanamo. It may surprise you that a former U.S. military prosecutor and many other retired senior U.S. military officers and members of the intelligence community agree with them.

The humane thing to do here is to Close Guantanamo. Please join us in the fight by signing this petition.”

It is good to know at least Americans are taking up the cause of protesting in Times Square and other places in USA to raise awareness on the hunger strikes in Guantanamo, so that more people can urge the government to close the detention centre. Some articles note that the longer the government prolongs this decision, the more outrage may arise over the injustice, which may indirectly spark more potential terrorism in future, whereas releasing the detainees is less risky since they can still be monitored. Besides, 86 of them have been cleared for release, so they have every right to be set free, which is in line with international laws.

“But even if another outrage were to happen, the evil of “Gitmo” has recruited far more people to terrorism than a mere 166. Mr Obama should think about America’s founding principles, take out his pen and end this stain on its history.”

(From “Prison deeply un-American, disgrace, it needs to be closed rapidly, enough to make you gag“)

I have checked out the video update, and like what the representative of the Centre of Constitutional Rights said, while it is good that the US president has said he is for closing the Guantanamo Bay detention centre because it is unjust and unsustainable, she felt that action needed to be carried out as soon as possible, and it was within the president’s power to veto the congress’ reluctance and to appoint people who have the backing and authority to be in charge of closing the detention centre. And yes, the priority is to first set the 86 detainees who have been cleared free to go back to their home countries where their families are waiting for them.

In view of the apparent lack of action from the US government so far, it seems the main way for the freedom of the Guantanamo Bay prisoners to materialise is for the rest of us is to continue supporting the cause for the freedom of the prisoners in whatever ways we can. I have googled about this issue earlier today, and it seems there are no major updates on the government’s part so far, except for some supporters’ blogs such as this one.

“According to the ACLU, there are two essential steps the president can take. One is to appoint a senior point person so that the administration’s Guantanamo closure policy is directed by the White House and not by Pentagon bureaucrats. The president can also order the secretary of defense to start certifying for transfer detainees who have been cleared, which is more than half the Guantanamo population.”