Having been reading on Facebook about the impending development of Lentor area that will result in the destruction of forest and two natural streams, I decided to check out the area this afternoon in search of the elusive streams.

But it turned out that I was a bit too late because when I arrived at Yio Chu Kang road via Ang Mo Kio Avenue 5, I saw that the entrance to the forest, where the streams were supposed to be, has been fenced off, and a portion of the forest behind a bus stop along Yio Chu Kang road has already been cleared. 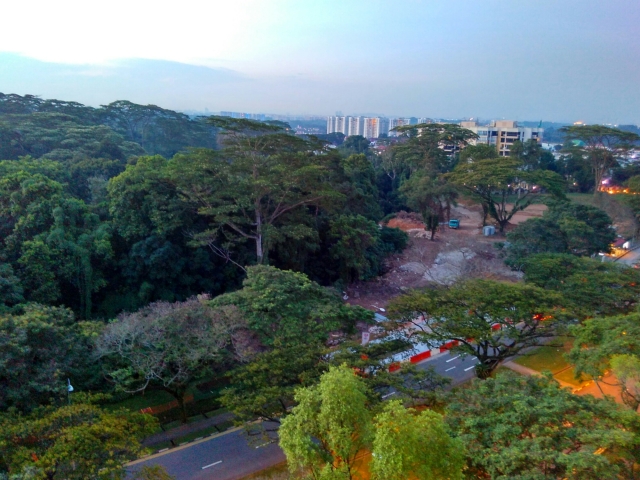 I decided to cycle around Lentor private housing estate, hoping to find another way to Lentor forest. The nearest I could get to the forest is via a canal near the junction of Lentor avenue and Seletar Expressway (SLE). 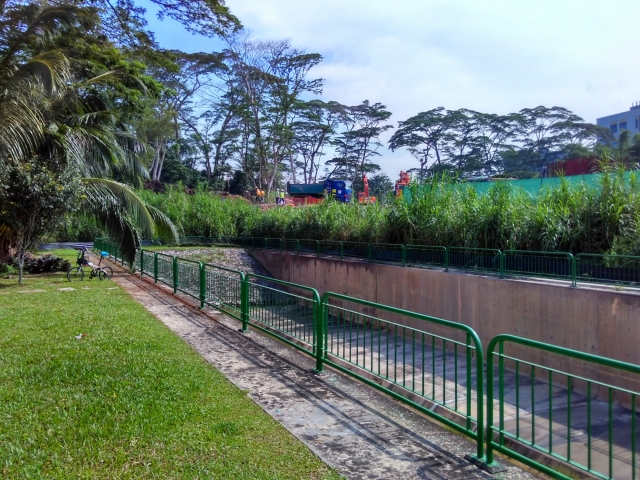 From the end of the canal, I could see heavy machinery clearing the forest. I found a path through the forest fringe that led me closer to the clearing.

I decided not to venture too close to the clearing and turned back. I later circled round the area via Springleaf nature park in the north to the other side of the forest, hoping to find an entrance to the forest from Tagore Industrial Avenue.

I managed to find a small entrance along the avenue, and walked some distance along the fringe of the Tagore forest. I came to the point where forest clearing was taking place in the south beside a stagnant-looking water body.

Is that part of a natural stream? I wasn’t sure, and I didn’t want to trespass the construction site, and decided to hike in another part of the forest. I followed a track through Tagore forest that led me to SLE in the north.

Apart from some wildlife such as a wild boar, a jungle rooster and munias, I didn’t see much in this area. There seems no signs of any natural streams. I suppose they are only found in the part of the Lentor forest that has been fenced off, which I wasn’t able to access. (Or maybe there is another entrance to Lentor forest that leads to the streams that I am unaware of, as I am unfamiliar with the area.)

I decided to call it a day, as evening was approaching. I cycled via Teachers’ Estate back to Ang Mo Kio Avenue 5, and took a lift up to the highest floor of a HDB block, and snapped some sunset pictures, showing an aerial view of the remaining forest next to Teachers’ Estate. 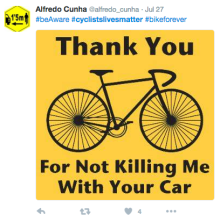 This realisation came to me recently while I was mulling over activism on social issues, particularly issues on anti-Black racism and anti-cyclist sentiments that have persisted for many years.

For a start, what do #BlackLivesMatter and #CyclistsLivesMatter have in common?

On the surface, both of these liberation movements seem unrelated and disparate because one has to do with race and the other has to do with the mode of transport or travel. But I would venture to say that both the Black community and cycling community have been subject to systemic oppression and inexplicable hatred from others for the longest time.

For the Black community, the age-old enemies have always been “micro-aggressions, white privilege and white supremacy“. Through centuries of white Euro-centric media propaganda as well as colorist traditions and mindsets in various parts of the world that favour white skin or fair skin over dark skin, the most sacred spaces in Black people are “often filled with stories of trauma, internalized racism and the struggle of self-love“.

Similarly, for the cycling community, the enemies are usually prejudice, ignorance and classism. On pavements or sidewalks, cyclists are often unwelcome as they are seen as a menace or nuisance by many pedestrians. On roads, cyclists are also regularly harassed or bullied by many motorists who drive cars, taxis, buses or trucks.

Both the oppressed groups – the Black community and the cycling community – often feel like they don’t really belong to the societal system because they don’t fit into the perceived norms. They are also often subject to unfair or negative stereotypes.

For example, whenever the issue of anti-Black racism or police brutality on unarmed Black people is brought up on social media or discussion threads, someone would attempt to derail the conversation by mentioning some negative stereotypes such as Black-on-Black crime instead of acknowledging that the problem of racial discrimination and institutional oppression does exist. The irony is that Black-on-Black crime is a direct result of White supremacy and internalised racism. If not for White supremacy, would Black people (or people of colour in general) be struggling with internalised hatred towards themselves and towards one another?

Similarly, whenever the issue of anti-cyclist sentiments is brought up on social media or forums, someone would attempt to deflect from the issue by talking about errant cyclists who knock down pedestrians on sidewalks or who flout traffic rules on roads. While there will always be a handful of rude or inconsiderate cyclists who give the majority of cyclists a bad name, it doesn’t detract from the reality that cyclists in general are discriminated and not given equal space, whether on pavements or on roads.

Contrary to negative colonialist views of Black people, Africans and African Americans in general are some of the most amazingly warm, humane and hospitable people in their own right. They have contributed to many important inventions and shaped the American culture, and they excel in art, sports, music and entertainment, to name a few. Without Black musicians, for example, there would be no rap, R&B, rock and roll, and soul music as we know and hear them today.

Similarly, cyclists are changing the world for the better in a number of ways. They take up less space and help ease traffic congestion on roads. They are environmentally friendly, as compared to motorists driving greenhouse-gas-emitting vehicles. Many of them also advocate a healthy lifestyle.

It is time for the world to acknowledge that Black lives do matter and cyclists’ lives do matter. It is also time for the world to stop subscribing to negative stereotypes of Black or darker skinned people as well as of cyclists and stop harming or killing them, and start appreciating them for who they are and how they contribute to the betterment of the world in their own ways and start standing in solidarity with them.